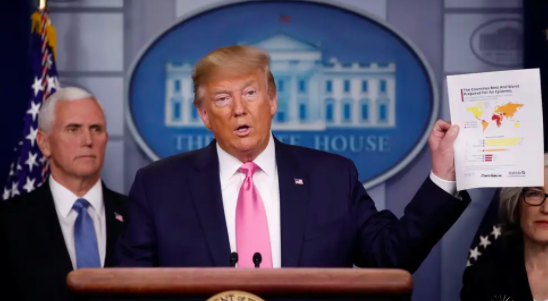 Commentary on Trump’s Response to COVID-19

Amid the outbreak of COVID-19, all eyes are on President Trump and his response to the pandemic, a response that many are finding to be ill-informed, or just simply too late.

“This country is relearning what it understood during the Cold War: We don’t elect presidents for the good days. We elect them to handle the bad days,” said Swalwell. “Donald Trump is incapable of handling a bad day, let alone a protracted pandemic.”

Problems causing this displeasure include uncoordinated distribution of health assets such as masks, ventilators and gloves, understaffed and underprepared medical personnel, and a crashing economy, not to mention the continual rise of COVID-19 cases and deaths in the United States.

David Leonhardt with the New York Times was also quick to criticize President Trump and his attempts to downplay the seriousness of the virus in its early stages.

Trump’s first response came January 22, where he confirmed that the first American case was “under control.”

Leonhardt goes after the President in his article, saying that in a time where response was needed most, the President’s priorities were elsewhere: “making the virus sound like a minor nuisance,” “claiming incorrectly that the situation was improving,” and “blaming foreigners.”

Leonhardt followed with a timeline of the president’s responses to the virus, beginning in January with his dismissal of the severity of the virus, and ending in mid-March with President Trump’s address that had the intent to convey seriousness—something Leonhardt thought to be too little too late.

I think it’s undeniable to say that President Trump and the government’s handling of this entire situation was not exactly how it should have been. It’s also important to recognize that this is the first time something like this has ever happened, so some mistakes can be attributed there.

Either way, some points are very convincing, while others seem to be looking to place blame somewhere, and President Trump is the target.

In a CNBC article by Noah Higgins-Dunn, a glimmer of hope was conveyed by what was written. Higgins-Dun focused on the positives from President Trump’s press briefing.

“Currently, 10 different therapeutic agents are in active trials and some are looking incredibly successful,” said President Trump. “…Additionally, other testing and development for possible vaccinations was confirmed, and people were encouraged to stay inside and that things are going really well.”