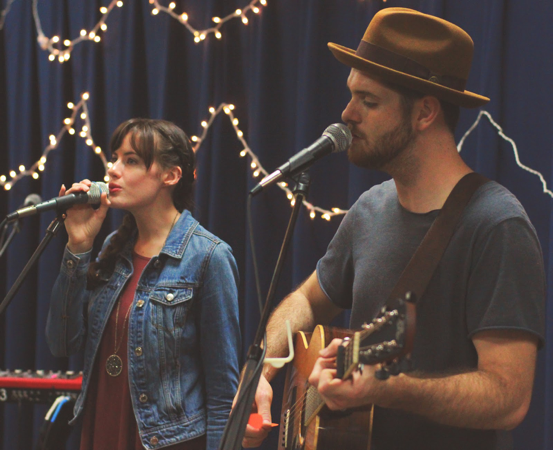 Driftwood captured Drakeford Lanier’s attention at a young age. His grandmother’s neighbor fashioned sculptures from the beaten, wave worn debris into works of art. Though fascinating to Drakeford as a boy, years later the power of this image struck him anew, inspiring him to write a song titled “Driftwood.”

“I just thought that was the most astounding thing,” Drakeford said. “Because that’s the Gospel. We get tossed around by the waves, and we wash on shore, and we’re found and given new value.”

Singer-songwriter duo Drakeford and Lucy-Jayne Lanier returned to the Rudd auditorium stage on September 20 after their first appearance two years ago. They gave a concert for students in Brock Hall that evening. Carried by a folk-pop acoustic style, the imagery of their lyrics point to the work of God in their lives. In turn, those stories, such as the one behind their song “Driftwood,” work to break down walls and start conversations about the Gospel – even across language barriers.

Oh I’ll live my life for you

‘Cause You gave your life for me

Died upon the cross

So that I could be redeemed

Oh and now my sin is gone

Your blood has set me free

Glorify yourself in me. (“Legacy”)

“I had no idea that God would actually take me up on that offer,” Drakeford said.

A few years after writing “Legacy,” graduation approached, and Drakeford didn’t know what he wanted to do after high school. He took a gap year and joined an Operation Mobilization (OM) creative arts team based in Istanbul, Turkey. The team used music and dance to minister to the local people and start conversations about the Gospel.

In 2012, the team travelled to Kyrgystan for a 2-week outreach. Lucy-Jayne joined this team from England, where she was living and working as a choreographer for a British Christian solo artist.  After two weeks of street performing and sharing the Gospel in Kyrgystan, Drakeford went back to Turkey with the OM group, and Lucy-Jayne returned to England.

“A few months later,” she said, “God actually spoke to me, He spoke to my heart and told me to move to Turkey as well.” Terrified, she heeded the call and moved to Turkey, where she reconnected with the OM group and with Drakeford.

Creative arts enabled the team to minister in places that would not have been open to the Gospel otherwise. Their love for music and for the Gospel took them throughout Central Asia, the Middle East and North Africa, from a Soviet palace to a high-security prison. Meanwhile, Drakeford continued to write songs, explaining his lyrics in Turkish when he could.

“It doesn’t matter if we were singing in English and they didn’t understand it,” Lucy-Jayne said. “It was the music that drew them in. And then, hopefully, it was the presence of God in that that made them stay and want to learn more about it.”

The best part came after the music ended, when they had the opportunity to disperse among those who gathered to listen. In these times they answered questions about the meaning behind their songs and shared the Gospel. It was hard work, Lucy-Jayne said, “but being able to see some of the fruits of that, [and the] friendships being built, was really special.”

The pair returned to the U.S. in 2015 to get married. They planned on staying a year to record their album Anchors Aweigh, then return to Turkey.

“We released the album, [and we thought] now we can go back overseas, we did what we came to do,” Lucy-Jayne said. “Instead, God opened up doors in the states to do music more full time as a ministry.”

With touring and trips to Nashville to record their second album, the Laniers live their life on the road these days.

“It’s still absolutely in our hearts to do missions,” Lucy-Jayne said. “We just want to be open to what God has. If he wants us to go back overseas, great, we’ll do it. But right now we’re really content with what he’s got us doing here.”

During the Brock Hall concert, Drakeford played a song called “Tip Jar,” recounting a time when he resorted to busking in the streets of Turkey to make some extra cash. He made money, but after a few weeks grew disheartened when he realized people passed by and threw change into his guitar case without stopping to listen.

I’ve got a lot to say, but instead I’ll write a song.

I’ll play it in the street, with a tip jar at my feet,

And hope that you’re listening.

And even though I’m not a very wealthy man,

God knows that I am happy where I am.

So keep the money in your wallet,

And no, I promise I don’t want it,

Just as long as you’re listening.

From Kyrgystan to Chattanooga, Drakeford and Lucy-Jayne’s music reminds listeners of God’s love and challenge them to live for Christ and love others. They hope that you’re listening.

MacKenzie is a junior studying Liberal Arts. She works part time as a nurse, and enjoys hanging upside down from ropes over rivers and doing homework in a hammock on her tiny back porch. Contact her at mbranch6965@bryan.edu.

Written by: Emilee Harvey, Staff Writer Coach Jason Smith, the head women’s basketball coach, adopted three children from the Philippines. And in doing so, stepped out in faith. The... Read More

Written by: Devin Burrow, managing editor DAYTON, Tenn.— Bryan College’s homecoming activities are under new management this year and have a new look.  Homecoming has usually been in the... Read More