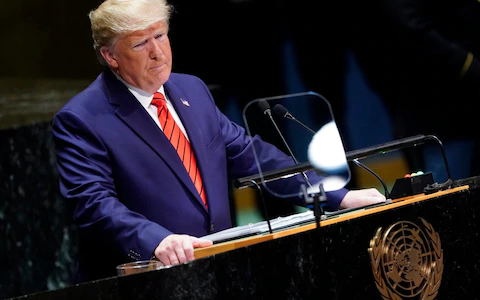 During this speech, he addressed many topics, ranging from the U.S. to the world, and the U.S.’s stance on some recent proposals by the U.N. He wasted no time getting into topics; six minutes in he had already addressed the U.N., current times, the U.S., other nations and the U.S.’s achievements since he took office.

Trump’s demeanor was different from that of other speeches he had given in the past. He was slow and paced himself; this is in contrast to what he usually does in his speeches. He has often taken a more bold and fiery way of stating things, which is evident in the speeches he gave at his rallies.

He had many notable things to say about liberty and the U.S.’s stance on it.

“I have the immense privilege of addressing you today as the elected leader of a nation that prizes liberty, independence and self-government above all,” said Trump. He then went on to say that the future does not belong to globalists, but to patriots.

Trump made many statements throughout his speech about the U.S.’s economic strength,  military strength and its stance on issues today. He commented that the U.S. is now the largest oil-producing country in the world.

He went on to say that his administration had spent 2.5 trillion dollars on rebuilding our military might, making the U.S.the most powerful nation in the world.

Trump declared that job growth and unemployment rate decrease in the U.S. and said that six million Americans had gained jobs in just under three years while he was president. This he coupled with the minority unemployment rate, which he said had hit an all-time low in recorded U.S. history.

Trump then addressed some of the countries which he had previously stated were a problem. He addressed his dealings with China and remarked that the U.S. will no longer be cheated by them. He then talked about the regime in Iran. The President called it a repressive one, one that threatens peace-loving nations.

The U.S. withdrew itself from the Iran nuclear deal in order to stop them from making weapons of mass destruction. Trump also said that he had placed severe economic sanctions on Iran, in order to send them a message that the U.S. will not sponsor the country’s “bloodlust.”

Towards the end of his speech, Trump made remarks on three things that the U.S. was going to do within the U.N.

The U.S. would never ratify the ideas of some U.N. bureaucrats, who seek to make a global fund for abortion up to birth. Trump said, “We here in America believe that every child, born and unborn, is a sacred gift from God”.

He also said that the U.S. would never ratify the U.N. Arms Trade Treaty since it would compromise our Second Amendment rights. To close his speech Trump said that he would be pushing for universal religious freedom for every country, and that intolerance of religions in other nations could not continue.

Written by: Samantha Burgess, assistant editor Break for Change offers students a chance to go on a short term trip over spring break, allowing them to sacrificially invest in... Read More

Written by: Isabelle Hendrich, staff writer Los Angeles — On Mon., Jan. 11 Jeopardy! aired its first episode with Ken Jennings as a guest host. He is also the... Read More
Avatars by Sterling Adventures