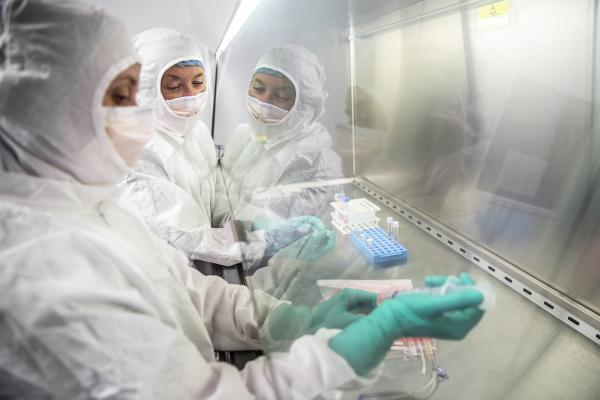 With COVID-19 continuing to spread across the world, several companies are working diligently on drug trials in the hopes of finding a new vaccine or existing treatment for the virus.

One of the first drug trials, tested by Mylan and Teva, was for the anti-malaria drugs hydroxychloroquine and chloroquine U.S  President Donald Trump announced that this possible treatment would begin distribution to patients in a White House briefing on March 18.

Roughly 30 million doses of hydroxychloroquine and one million doses of chloroquine have been donated to the nation’s Strategic National Stockpile. The medications can be distributed and prescribed by doctors for adults and teenagers who are hospitalized with the COVID-19 illness when a clinical trial is unavailable.

However, the European Union has cautioned that there is no substantial evidence supporting hydroxychloroquine as an effective treatment for COVID-19. Recent concerns have also been raised that the drug may cause heart risk issues in patients.

But, hydroxychloroquine is still in the early stages of testing and it will be a while before there are any conclusive results.

Hydroxychloroquine is just one of many antiviral drugs in the early stages of testing. “Antivirals target the virus in people who already have an infection,” stated an article from Healthline. “They work in different ways, sometimes preventing the virus from replicating, other times blocking it from infecting cells.”

Vaccines, on the other hand, are designed to protect people before they’re exposed to a virus. Essentially, vaccines train the immune system to recognize and attack the virus when the body encounters it.

Several companies have started trials for a COVID-19 vaccine.

Moderna began testing its first messenger RNA (mRNA) vaccine in a Phase I clinical trial in Seattle, Wash. on March 16. Moderna has several other vaccine trials, including one for a Phase 1 trial of a Zika related vaccine which, according to data released on April 14, has shown positive results.

Johnson and Johnson began their own trials for a COVID-19 vaccine on March 9 in Lillie, France. They have received good results and plan on starting human trials in September. If all goes well, Johnson and Johnson aims to produce 600 million to 900 million doses of its potential coronavirus vaccine by April 2021.

In addition, there are three alternative ways that scientists are looking to target the virus or treat the complications of COVID-19.

Monoclonal antibodies, drugs that trigger the immune system to attack the virus, have been isolated by Vir Biotechnology from patients who survived SARS. The company is partnering with Chinese firm WuXi Biologics to test them as a treatment for COVID-19.

AbCellera has isolated 500 unique antibodies from a person who recovered from COVID-19 and will begin testing trials.

The FDA has also announced a process for medical facilities to conduct trials on an experimental treatment that uses blood plasma from recovered COVID-19 patients with the idea that the plasma contains antibodies that will attack the virus. The New York Blood Center began collecting plasma on March 26 from people who have recovered from COVID-19.

The early stages of testing may last several months before reaching clinical trials that will allow for human testing. Once clinical trials have started, FDA officials stated that it could still be a year before any drugs are available to the general public for COVID-19 treatment due to the agency’s safety precautions for the use of new drugs.

Despite the hindrance of time, several companies have seen positive results in their trials and are hopeful that they will be able to create an effective vaccine or treatment for COVID-19.