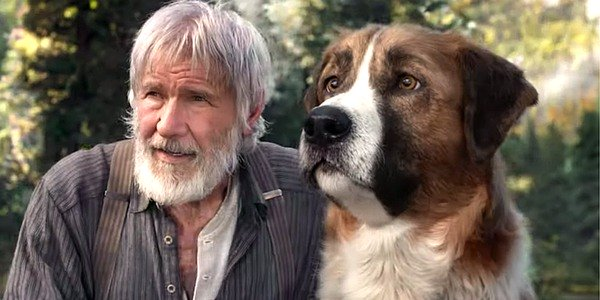 Movie Review: The Call of the Wild, an adventurous, warm-hearted film

Harrison Ford continues his legacy of dramatic and heart-wrenching deaths (Star Wars) in The Call of the Wild. When it hit the theatres on Feb. 21, the movie exceeded domestic box office expectations. As of March 10, the move has made 101.3 million dollars, with 58.8 million of that from U.S and Canada.

Chris Sanders, the director, made many other classics, including: How to Train Your Dragon, The Croods and Mulan. Sanders also wrote, animated, and was the voice of Stitch in Lilo and Stitch.

Besides Harrison Ford, other actors in The Call of the Wild included Karen Gillian, Dan Stevens, Bradley Whiteford and Omar Sy.

The Call of the Wild, originally a book by Jack London, is about a spoiled dog named Buck who becomes a sled dog. Although a few details of the movie were changed from the original book, it stayed with the general theme of Buck befriending a miner looking for gold in Yukon, Canada while he is working a sled dog.

After the miner dies, Buck joins a pack of wolves he befriended in the wild. The movie beautifully illustrated the bond between man and dog with stunning cinematography and adventurous senses that would be exciting for the whole family and anyone who loves dogs.

While the man, John Thornton, played by Ford, was originally killed by Native Americans in the book, he dies in the movie due to a gunshot from another greedy miner. This drastic change occurred due to the book including Buck attacking the Native Americans on a regular basis, which would have not made a very good ending to the movie. Having had a few encounters with Buck on his way to Canada, Thornton was originally looking for an escape from his life of depression.

He left his wife to go up north to grieve by himself after their son died suddenly. Thornton eventually adopts Buck and they become best friends. Buck does not stay with Thorton forever, though, because at the end of the movie, Buck hears the “Call of the Wild.”

Ford’s gray beard and plaid shirt helped his rugged appearance but what was ultimately brilliant about Ford’s character was his display of deep loss for his son. When he found Buck, he regained hope for life and decided to return to his wife, but never received the chance.

Although he did not appear in many scenes at the beginning of the movie, Ford narrates Buck’s life until Ford’s character meets him. Despite this being different from most movies, the narration was good for the audience to understand what Buck was feeling since he had no other way to verbalize it besides barking.

Rated by the MPAA, The Call of the Wild was rated PG, for “some violence, peril, thematic elements and mild language.”

While the dogs in the movie are CGI (computer-generated imagery), they illustrated the story satisfactorily by being interwoven in the movie well. The reason for CGI was to appeal to animal activists and to save time and money.

Although it would have been better to have seen real dogs on the big screen, The Call of the Wild was a well-orchestrated and wonderful movie that showed the enduring friendship a dog can have with man.

Genesis 1:28 says, “And God said to them, “Be fruitful and multiply and fill the earth and subdue it . . .” Here, God commanded Adam and Eve to subdue the earth and to take care of it. The Call of the Wild centers around the main human character who is mining for gold. While God gave us the ability to use the earth’s resources for our benefit, we should not abuse them or take them because we are greedy. The miner who killed Thortnon was another miner who was greedy and did not value God’s creation. He was unlike Thorton because he took only enough gold to live comfortably, not richly.