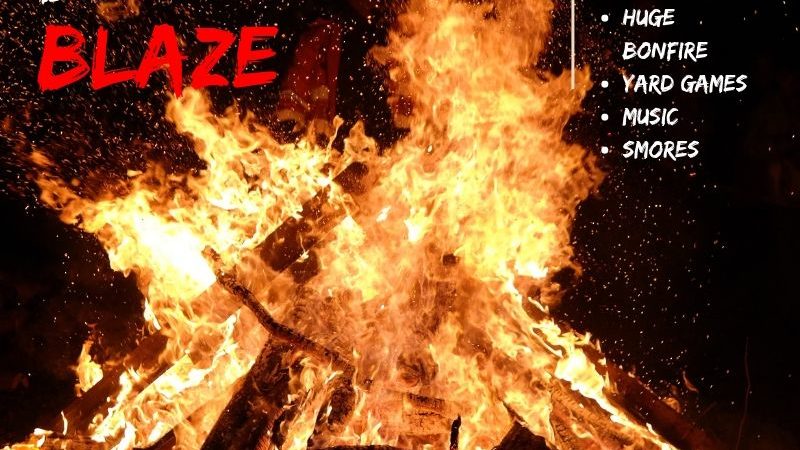 BC BLAZE: A preview of Bryan’s newest event

UPDATE: BC Blaze has been postponed until further notice due to fire ban statewide.

This October, Bryan College is offering a bonfire event that will include food, music, yard game and s’mores to celebrate homecoming.

BC Blaze is a campus-wide activity that changes the normal stereotype of a BC event. It will begin at 8:30 p.m. on Friday October 4, 2019 in Dayton, Tenn.

The centerpiece of the event is a large bonfire in the middle of the quad.

Accompanying the bonfire will be music set up through the residence life sound system and yard games such as cornhole, ladder toss and spikeball.

For food and drinks, the event will offer smaller bonfires for roasting s’mores provided by the school along with pink lemonade and water. Seating will also be available with hay bales.

A huge bonfire isn’t the only theme of the event. Alumni, students and faculty will share time together to celebrate homecoming and the soccer team for the next morning’s games.

“We are hoping that the event will become more than just a bonfire to sit at,” said Bailey Moore, a resident assistant in Woodlee-Ewing hall. “We want it to be an environment that is conducive to community and an event that can happen again.”

A special fire pit is being erected by the physical plant in conjunction with resident assistant Jonathan Hostetler and Vice President Tim Hostetler.

“Currently, the size is being rendered as either eight by eight foot or 10 by 10 foot,” said VP Hostetler. The pit will be made of four mobile, lightweight squares that, when placed together, will become the basis for the bonfire. The pit will also be founded by cinder blocks underneath to separate the pit from the ground.

Residence life is responsible for the smaller fire pits. Surrounding these smaller fires will be tables each holding the different articles needed for s’mores such as chocolate, graham crackers, marshmallows and skewers.

According to residence life, the event should last until 11:00 p.m. or until everyone leaves.

Devin Burrow is the managing editor for the Triangle. He is a senior communications major with an emphasis in digital media. Devin serves as a resident assistant and senior class male senator at Bryan College.