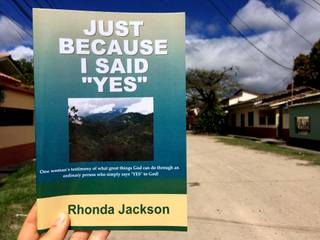 DAYTON, TN – Just Because I said “Yes” by Rhonda Jackson is a book detailing her journey of opening a school and home for children in Siguatepeque, Honduras. Jackson is a Bryan College alumni who graduated in the late 1970’s and majored in Christian Education.

Jackson begins her book with a few key aspects of her life, firstly that her parents became Christian’s when she was four years old. Jackson writes, “I prayed a prayer of salvation when I was about seven years of age. However, I doubt very much that I was truly born again at that point. My only motive was the knowledge that every other member of my family would go to Heaven and that I would be going to Hell.” It was not until Jackson came to Bryan College that she truly understood what it meant to be a Christan and to be forgiven by God.

After she graduated from Bryan College, Jackson moved to Dallas, Texas and became a secretary at a church and worked with the youth group. After working at the church a few years, Jackson’s uncle called her to tell her he needed a new housemother for the children’s home he ran. After agreeing, Jackson worked as a housemother for six years before she felt God calling her to get a different job. Jackson got approval from the children’s parents that she was currently raising to continue to do so as she worked as a secretary for a lawyer for three years in Houston, Texas. Jackson then moved to Georgia to be near her family. It was during this time Jackson went on a trip with her pastor to Honduras for the first time. Jackson did not speak Spanish, and in her book she wrote, “Since I couldn’t really speak to many of the people and couldn’t imagine what God would do with me there – all I knew was that I did not want to leave this beautiful place and its people.”

While Jackson was not sure what God wanted to do with her yet in Honduras, she notes He was clearly calling her to go. The last girl in Jackson’s care graduated from high school and Jackson was let go from her job. Both occurred within a couple of days. Jackson moved to Honduras on September 8th, 1999.  Jackson lived with a woman she knew from her church who was originally from Honduras. Since the woman Jackson was living with had lived in the United States for the past two and a half decades, she mostly spoke English. Wanting to learn Spanish faster, Jackson moved to Jocon, Yoro, Honduras to live with the women’s family she had been staying with previously.

Seeing the poverty in Jocon started Jackson’s desire to open a school and home for children in need. Destino del Reino, the name of Jackson’s school, is like a boarding school where parents who are very poor send their children to live so they can have the opportunity to study and receive a good education. Once Jackson said yes to God and decided to start working on Destino, God blessed her in many ways.

A friend’s husband’s uncle heard about Jackson’s desire to start Destino and gave her ten acres of land in Siguatepeque and agreed to give her more as she needed it. Another friend who worked for an electricity company in Houston, Texas asked his company if there was any way Jackson could have a discounted price for supplies in order to get electricity. Ultimately, the company gave her the supplies she needed for free. The workers from the company worked for free as well. To have electricity installed would have cost $30,000.

Another provision from God Jackson notes in her book is water. When the school first opened, Jackson would have to walk to the river each day to full up jugs of water. Then, three days in a row, Jackson read her Bible several different passages discussing abundant water. She felt like it was God’s way of telling her that He would give her abundant water for the school and home. By several miraculous donations, they were able to hire a company to drill for water, despite the region where they were located was known for having no wells since water was difficult to drill for. God blessed Jackson with not only striking water but they discovered 50 gallons of pure water per minute at 580 feet deep.

Destino Del Reino, the name of the school, means Destiny in the Kingdom in Spanish. Jakson discusses Destino’s meaning in her book and Destino’s website says, concerning Destino’s goal for their children, is, “Through training in the Word of God, they discover the personal hope they have in Jesus Christ and are prepared to return to their villages as leaders with a destiny of hope.”

Currently, Destino’s school teaches K-12th graders. Jackson is considering adding career paths and university classes to Destino, but this will take at least a year or two. There are many other miraculous stories that Jackson describes in her book, which she notes is only a fraction of what God did for her in her journey in creating a school and home for children in Honduras. Jackson’s book, Just Because I Said “Yes”, is available to buy at destinodelreino.org.

Jackson writes that, “Everything you will read here really happened – all the miracles of protection and provision, and all the examples of what God will do to show Himself (that’s me – and that’s you, too!) when we listen to Him and do what He says to do.”

Luke 13:32 says “Fear not, little flock, for it is the Father’s good please to give you the Kingdom.”

Written by: Emily Hutson, features editor The friendships you make in the first month at college determine more than just where you sit at lunch. These friends can either... Read More
Avatars by Sterling Adventures