Growing up as a child your family may have had one of two standpoints on Halloween. One Halloween is a harmless holiday where children can dress up in costumes and go house-to-house or trunk-to-trunk saying, “Trick Or Treat.” Or Two Halloween is an evil holiday backed by satanic practices that Christians have no business participating in.

Obviously these two standpoints are very different so the real question is; who is right? To accurately answer the best step we can take is to look at what Halloween is.

Where did Halloween come from?

It is believed Halloween originated Halloween originated from the ancient Celtic festival of Samhain. On Samhain people would light bonfires and wear costumes to ward off roaming ghosts. The current name Halloween was derived from is All Hallows Eve, which was appointed by Pope Gregory III. The following day Nov. 1 would be known as All Saints Day, which is a day of remembrance for all the saints, and martyrs who came before celebrated by the Catholic Church.

Now a days Halloween has developed into a traditionally secular holiday with an emphasis on treats rather than tricks and children earn them by dressing as their favorite movie, television, or comic book characters.

On the darker side of things Halloween has a history of being associated with witchcraft and all things paranormal. Halloween costumes often reflect these things by either attempting to show these concepts in a brighter light or taking the more drastic end of things (full out gore and grotesque appearance.)

With such drastic differences in ways to celebrate where do we draw the line? Is it indeed appropriate for Christians to celebrate Halloween?

I believe it all sums up into how you choose to celebrate and what that day means to you. I understand that I will receive push back from my fellow brothers and sisters in Christ, however I believe a holiday means what you want it to mean. You can enjoy a holiday without agreeing with everything that holidays historically may have stood for.

For example Christmas is a holiday that nearly all Americans celebrate. We celebrate it on Dec. 25 which just happens to be the same day as the Winter Solstice which happens to be a pagan day that commemorates the day in which pagans believed the spirit world and the human world were at there closest.

Another tradition that was undertaken for the Winter Solstice was to take in an evergreen tree or some type of pine tree. The reasoning was the pagans believed that by bringing something alive such as what would later be called a Christmas tree into a home was to fend spirits off. Because by bringing a tree into the home then one could hope to keep away evil spirits as well as be reminded of warmer weather that was to come.

In the Christian faith it is believed that the first person to popularize the tradition of Christmas trees in the home was Martin Luther himself. Martin Luther believed the tree was so beautiful that’s he told his children it reminded him of Jesus who left the stars of heaven to come to earth.

Whether you believe Christmas is literally on Dec.25 you cannot change the fact that there are unfortunately pagan practices. The church chose to celebrate Christmas on that day in order to counter act the pagan ritual. But that does not change the cultish practices that were celebrated on Dec.25.

Does this make Christmas or any person who brings a tree into their home a pagan? Of course not! Many people hardly even know about that custom because they choose to put their hope and faith in something more substantial. The birth of a child, Jesus, who would be born live a sinless life and then die for the sins of all mankind. Martin Luther who probably had knowledge of the pagan traditions saw the beauty of Christ and transformed it to be seen in a Christian light.

If you choose to celebrate things in a secular/pagan light than yes that does put you in the wrong. However if you choose to dress up as something innocent and take your children to go in search of candy than no I don’t believe there is any harm in a Christian choosing to take part in Halloween.

However if your using the holiday to cause havoc or take part in rituals that are laid out in the Bible as evil or have no relationship with light than yes those are the things that Christians should not associate themselves with. 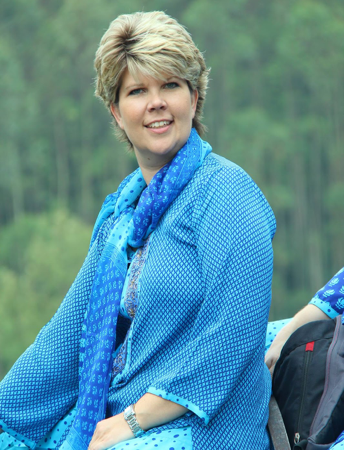 Written by: Samantha Burgess When you’re greeted by Lisa Potter’s easy smile, quick-witted humor and readiness to serve others, you might not expect that she had a rough childhood.... Read More

Written By: Morgan Renninger       As the seasons are getting colder and the month of December approaches, everyone is excited for the biggest holiday of the year,... Read More