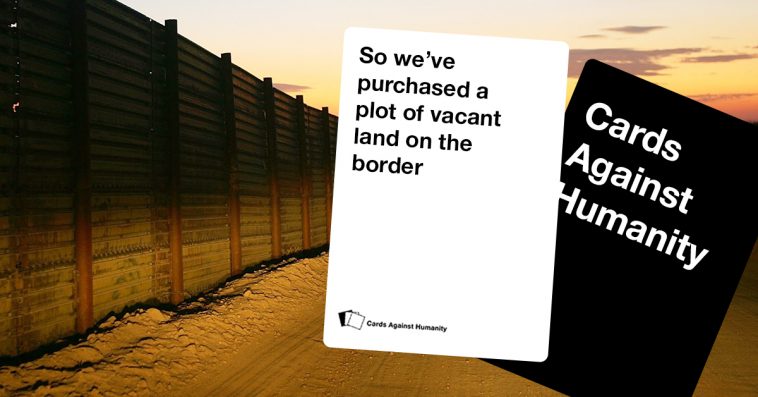 In a project known as “Cards Against Humanity Stops the Wall,” the popular comedic card game company has used monetary donations from over 150,000 contributors to buy a plot of land along the US/Mexico border. The company’s plans are to make the addition of a border wall as difficult and time-consuming as possible.

Little has been disclosed about the few acres of land purchased, other than a crude and humorously drawn map released by the company. Depicted in the drawing is a border wall with illegal extraterrestrial aliens in area 51 on the American side, and Smash Mouth on the Mexican side. The map also shows an  area of land in which the company owns, with a catapult breaking down the dividing wall. 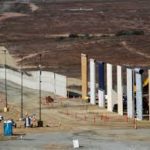 With the purchase of a plot along where the wall is to be built and the hire of a law firm specializing in eminent domain, the adult card game, which describes itself as “a party game for horrible people,” has taken the necessary steps to make the construction of a border wall on their property a lengthy process. The card-game company hired the firm of Graves, Dougherty, Hearon and Moody who specialize in eminent domain or “the power of the government to take private property without the owner’s consent.”

In the firm’s official statement, the entire legal process is detailed and outlined. A case involving government use of private land can be a very lengthy and drawn out process. It can involve the government simply offering a monetary amount for use of the land that can be taken to court in the form of a lawsuit if an agreement is not made. According to the law firm, “The whole legal process can take quite a long time — who knows, maybe longer than the current President will be in office.”

The firm also stated that, “For however long it takes, we are ready for a protracted resistance to any attempts by the government to build a wall on this land.” They also have plans to fight in court at every stage of the legal process, and assure that “every available legal tool” will be used to ensure that all rules and regulations are followed by the government.

The card game company did critique President Donald Trump’s plan for the construction of a border wall, referring to it as “12th century military technology” and saying that “walls have been militarily obsolete since the invention of gunpowder.” In connection to this statement, as well as in a form of mockery towards the wall, a 30 foot medieval trebuchet designed to destroy walls was built on the purchased land.

On the project’s website cardsagainsthumanitystopsthewall.com, the company did acknowledge the unlikelihood of 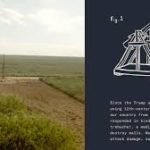 any threat being posed to the wall, but that they will be “a big pain in the a**” when it comes to construction on their land. They were also quoted as saying, “For legal reasons, we are not threatening to destroy U.S. government property with our glorious medieval siege engine. We cannot possibly overstate that we are not going to crush Trump’s $20 billion wall with our totally bada** trebuchet. But if we wanted to, we could. But we won’t. But we could.”

The project recently gained celebrity social media praise, with acknowledgement coming most notably from actress Alyssa Milano and comedian Christopher Titus, among others.

Nathan Kernell is a sophomore majoring in communications with a focus in digital media. He is a very swell guy. 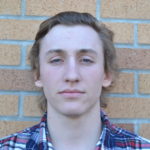