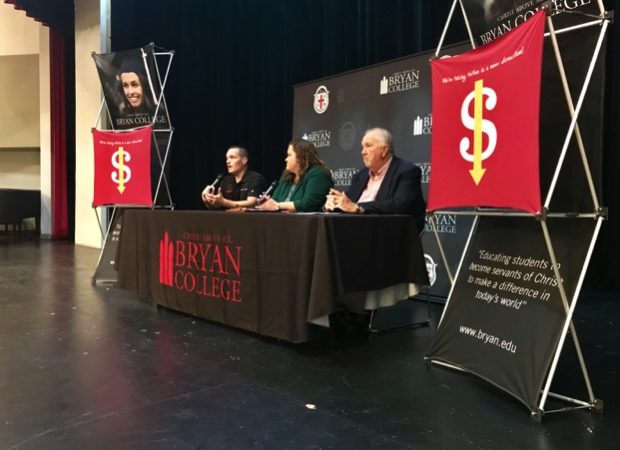 DAYTON, TENN.—Bryan College announced on September 4 that they are reducing tuition costs by 40%. The school hopes to make itself more accessible to current and prospective students.

Director of Financial Aid David Haggard said the school hopes to have a competitive edge over other private Christian colleges by offering tuition that benefits prospective students who would not otherwise be able to afford to attend Bryan.

“We get to be in the conversations at the dinner table when we would otherwise be out of the question,” Haggard said.

“We’re tired of being the best-kept secret in Christian colleges,” Scruggs said.

The reduction will take Bryan’s annual tuition from $27,900 to $16,900, according to College President Dr. Stephen Livesay. Vice President of Academics and Provost Douglas Mann said the school will also be freezing the cost of room and board for the fall of 2020. The final total cost of room, board and tuition at Bryan College in the 2020-21 school year will be $24,700. The College will continue to offer the Difference Maker free Master’s degree program for those graduating with a 3.5 average.

The changes were officially announced in the Bryan College chapel service on September 4 by Lebron Purser, a member of the board of trustees.

“This is going to be one of those days that forever changes the direction of the College. I hope you’re going to take this and run with it and use it to get the education you deserve,” Purser said. Purser stressed the importance of avoiding student debt and the danger of accruing too much debt.

In addition to tuition being reduced by $11,000, the school is also reducing their scholarship amounts by an average of $11,000. The cost of room and board will not go up in the 2020-21 school year.

“What we are doing is readjusting and taking a look at all of the scholarships and grants that we offer to our students and saying, ‘How do we bring them more into line with the new reality of the tuition reduction?’” Haggard said.

Bryan College’s website estimates a total savings of at least $1,400 for every student. Haggard said that the $1,400 saved was estimated from the 4% annual rise in out-of-pocket cost that usually occurs. Bryan College will not be raising the out-of-pocket costs of tuition for the 2020-21 school year.

Vice President of Finance and Enrollment Rick Taphorn explained that the scholarship amounts at Bryan College do not come from funds in the budget.

“Bryan has about $10 million in the budget for scholarships, and only a million of it comes from donors,” Taphorn said. “The other $9 million are a discount that Bryan gives to students.”

Haggard said students can expect a more detailed breakdown of their scholarship amounts when the school releases next year’s financial aid letters.

Mathäus Schwarzen is a staff writer for the Bryan Triangle, and a sophomore at Bryan College, majoring in creative writing. He spends his free time writing and listening to music. When he graduates, he is considering working for a travel magazine.