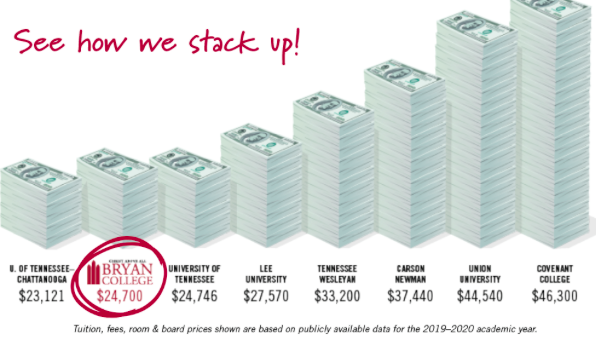 DAYTON, TENN.—Bryan College held a Q&A session on September 10 to make clarifications about its recent announcements of reducing tuition and lowering the limit of credit hours.

Haggard said that the goal of the tuition reduction is to open the school to more prospective students who might not have considered Bryan as an option because of its high price tag. He also said that the previous tuition model did not seem sustainable to the school.

“From my perspective, it’s to be able to provide access to people that are looking and trying to make a good decision on, financially, where their student should go, and to be able to feel more comfortable with those prices before they even walk in the door,” Haggard said.

“We believe in what Bryan is doing and we want to get that into the ability of more students to make that selection,” Haggard added.

Bryan College announced on September 4 that it was cutting its tuition by $11,000, but many students did not realize that the school was also cutting the average scholarship package by the same amount. Information leaked the same day that the school was reducing the maximum number of block hours from 19 to 16, leading to alarm in some students. The school issued an apology on Facebook two days later.

Scruggs confirmed that the block hour changes will be going into effect in the fall of 2020.

“That is next fall, but we’re doing a lot of work between now and then, including revising the core gen ed requirements,” Scruggs said. “I wouldn’t even let that worry you at all. We will make it work for students to complete in their planned graduation date.”

Mann said that the school is looking to fit majors into a 128 hour block and bring every major back to a normal workload.

The cost per hour over 16 for the 2020-21 school year will be $700, but Haggard expressed a willingness to work with students if the school was unable to finish reworking the majors in time.

“I’m still committed to making sure that a student is paying the same as they were last year,” Haggard said. “If there was a necessity for them to have a class, and for some reason that wasn’t fixed or adjusted in some way through the curricular aspect, I will work with them.”

Haggard also said that the school would be unable to make a financial exception for dual-majors and dual-minors who wished to go over the limit. He also said that the school’s tuition reduction will not affect student’s state and federal financial aid, and that percentage-based scholarships, such as faculty and athletics scholarships, will still cover the same percentage of tuition.

Mann apologized again for any confusion the original announcement of tuition reduction might have caused. He hopes the new tuition price of $16,900 will be a better picture of what a Bryan education actually costs.

“The intention was not to mislead,” Mann said. “We acknowledge that maybe we missed on that. That’s on us, but the bigger piece of this is transparency.”

The Bryan College Financial Aid Office has invited students who have questions to come to their office to further discuss the changes.