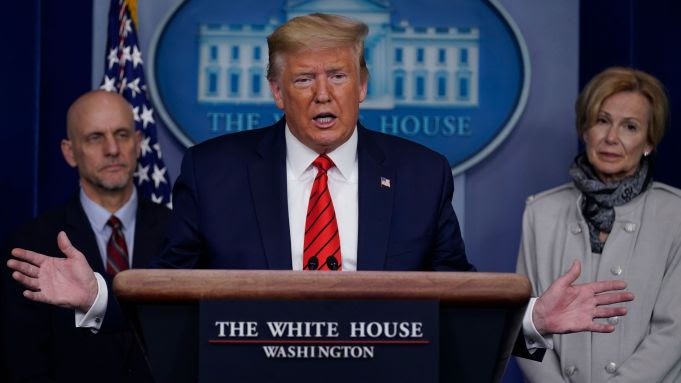 Unnecessary blame? A look at the media’s criticism of Trump’s COVID-19 Response

There’s a political split against Trump, with only 12% of Democrats believing that Trump is doing a good job at addressing COVID-19.

The government isn’t the only split surrounding Trump, however. Much of the media is against Trump as well.

The media is ruthlessly attacking him left and right, and many Americans are jumping on the bandwagon by commenting on his presidency on twitter.

Rather than supporting Trump as he attempts to take on a national crisis, thousands of users respond to each of his tweets with insults. But all of the negative energy is only strengthened by the media.

Jamille Bouie of the New York Times claims that, “Trump ignored, downplayed and dismissed the problem.”

Bouie, like many other journalists, believe Trump has taken COVID-19 too lightly. Journalists are going so far as to detail everything he has done, holding it against him.

Dan Evon, a journalist at Snopes.com, highlighted Bouie’s sentiments by posting a timeline of Trump’s activities since January. While all the pieces he’s found are accurate, Evon has left out all of Trump’s positive activities, focusing solely on the negatives.

Trump’s approach to COVID-19 has also been under attack, especially after a woman named Wanda, who asked that her last name be withheld, drew national attention by claiming that Trump had suggested she consume the fish-tank cleaner with her husband, and that she did so to avoid getting sick, resulting in her husband’s death, according to Gregg Re in a Fox News article.

Just like Wanda, we all want someone to blame for the chaos COVID-19 has caused. The consequences, caused by a virus Trump is trying to prevent, are being pinned on him—is he deserving of this? Not in the slightest.

COVID-19 is not Trump’s fault, it is an unforeseen circumstance. While Trump might not have handled the situation perfectly, he is doing what he believes is best. The virus has nothing to do with him, and Trump has done all he can to prevent this crisis from destroying our economy, while saving as many lives as possible.

Trump’s task is no small one, as the virus continues to spread rapidly, even with the White House’s suggestion that everyone stay at home.

The virus has been moving faster than anything America has experienced, and Trump has responded well. Libby Cathey quotes his announcement to declare a national emergency in an article on ABC News.

The article explains the numerous resources he will have access to in an effort to save the country when he announces something as extreme as a national emergency.

“Referring to that phrase as ‘two very big words,’ he said it would allow him to quickly get $50 billion to states, territories and localities ‘in our shared fight against this disease,’” Cathey wrote. Trump is taking advantage of every available and logical resource he can use without destroying his country’s economy.

Despite his consistent efforts to save our country, Trump is still experiencing extensive backlash. Many American do not seem to understand all he is doing, but Trump does not allow them to get to him.

While being attacked on Twitter by the very people he’s serving, Trump uses the same platform to encourage them, reminding his citizens that he is making progress in the face of this relentless disease.

Trump makes announcements on Twitter to keep Americans positive in the midst of this chaos. He tweets, “We are winning, and will win, the war on the Invisible Enemy!” He even keeps Twitter users up to date on his activities.

According to his Twitter, Trump is regularly holding meetings to combat this “invisible enemy.”

He encourages companies like DuPont and FedEx in their efforts, announcing that they delivered 450,000 protective suits to Dallas, Tex.

But Trump has done even more for America than just the things he has posted about on Twitter. He is constantly working with his Administration to determine what American’s can do on their own to help prevent COVID-19.

In an article by Lynde Langdon posted to World Magazine, the Trump Administration suggests wearing a mask whenever going outside, even a cloth mask, to protect from the virus.

This is just one of the many announcements Trump has made in reference to COVID-19. Situations are ever-changing, requiring our government to stay consistently on top of things.

There are very few articles like Langdon’s that convey Trump’s activities against the virus positively and it seems that the “Fake News,” as Trump calls it, is an attempt to keep people entertained while they are stuck at home.

Rachel Griffin is a senior majoring in Communication, media and culture. She is a guest writer for the Bryan Triangle.