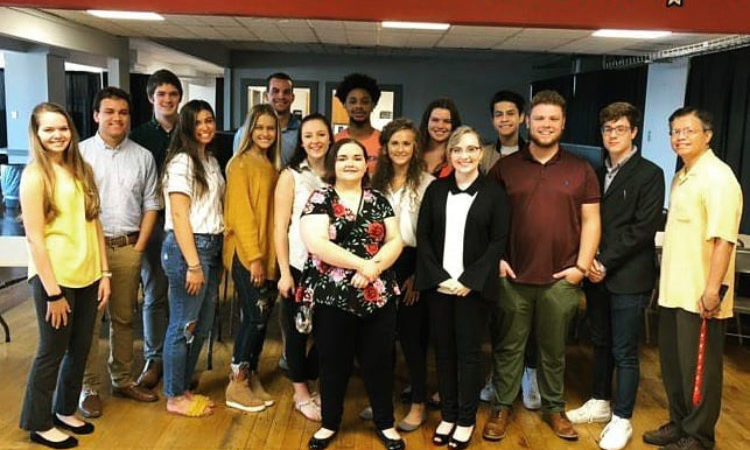 Kennedy writes opinion pieces for the Times Free Press as well as a “Life Stories” column, where he interviews people from all walks of life and writes about their stories.

The first stop on the tour was an area that exhibited various newspaper technologies from different points in history. Among the objects we saw were 100-year-old photographs and a copy Gutenberg press.

After talking about the background of the Times Free Press, Kennedy brought the students to the second floor. This floor houses reporters’ and editors’ offices, the copy room, which was formerly the photography room, and the interview room, where former President Barack Obama has been interviewed.

After this, Kennedy showed the students  the Times Free Press’ printing machine. The machine is four stories tall, cost $40 million and took one year to assemble.

Sadly, it only runs at night, so the group saw the beast in its mere dormant state.

To finish out the tour, the group sat in on a meeting with the editors as they discussed what their writers were working on for that day’s issue; some of the stories were about crime and the Ironman race.

They followed this by having a discussion with the group of students about ethics, factuality and audience in journalism.

The editors discussed with the group how plagiarism was not something they took lightly. They told them about plagiarism issues they’d had in the past, and how easy Google has made it to spot plagiarism.

This is especially important as the Times Free Press continues to broaden their accessibility on the internet and social media, their primary market of news.

They also discussed the editing process with the group. Editors like to discuss stories in-depth with their writers before they start reporting, and a lack of this sort of communication can lead to a poor or unexpected story.

Additionally, the editors explained that reporters must approach each story with the exact same commitment to quality and factuality, whether it’s interviewing a government official or covering a high school football game.

“Your standards have got to be the same whether you’re a weekly paper or the major metropolitan paper in the world’s largest city,” said chief photographer Robin Rudd.

Moreover, the editors shared with the group that they love bringing news to their local community.

The Times Free Press offers subscriptions to their daily papers, and is also accessible at www.timesfreepress.com.