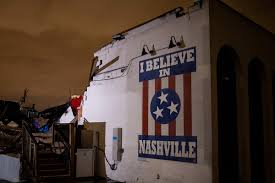 NASHVILLE, Tenn. – A massive tornado swept through Nashville early Tuesday morning with winds as high as 160 mph. It initially touched down at 2 a.m. on Tuesday morning. So far 25 people have perished because of the tornado, with several still missing.

The tornado was classified as an EF-3, the fourth-highest on the six-level Fujita Scale. The scale begins with 0 and ends with 6, the latter being at least 261 mph and the largest ever recorded.

The largest disastrous tornado to hit Tenn. happened exactly a year ago on March 3, 2019, which killed 23 people. Tuesday’s tornado has unfortunately topped that record with 25 deaths.

Mayor John Cooper of Nashville officially declared Nashville to be in a state of emergency on Tuesday, which means that the government can now do actions outside of its normal parameters to help in certain situations. In this specific instance, Mayor Cooper declared that the state would focus its “efforts in acquiring and distributing necessary supplies and services to affected residents.”

The tornado swept through central TN, destroying homes, stores and buildings in its wake. It passed through North Nashville, the heart of Nashville and finally through Frederick Douglass Park before it left Nashville.

A total of 48 structures in and around Nashville have collapsed due to the tornado. At least 50,000 homes and businesses are still without electricity in Nashville and in surrounding counties.

At a NAC conference in Washington, President Trump said, “I want to send my warm wishes to the great people of Tennessee in the wake of the horrible, very vicious tornado.” President Trump also said he will be visiting middle TN on Friday in light of this horrible tragedy.

“Nashville is hurting, and our community has been devastated. My heart goes out to those who have lost loved ones,” Mayor Cooper commented on twitter. “Be sure to lend a helping hand to a neighbor in need and let’s come together as a community once more. Together, we will get through this and come out stronger.”

Many have pledged their support, including owner of the Titans, Amy Struck. She said that the Titans franchise will help in any way possible. Even though the Nissan Stadium lost power, it has been restored and all of the team and faculty have been accounted for. The stadium was not damaged in any way and was not in the tornado’s path.

Tuesday’s tornado was a great tragedy to TN and to the loved ones of people who died. Many people have helped clean up the tornado’s damage, but it will take some time. Right now we should pray for those who have either lost their home, car or electricity. But we should especially consider those who have lost someone they loved as a result of the terrible tornado.