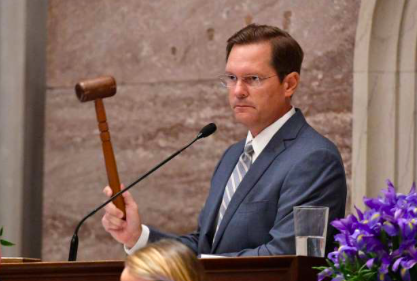 Sexton sworn in as new Tennessee speaker of the house

NASHVILLE, Tenn. – Rep. Cameron Sexton, R-Crossville, was sworn in as the new Tennessee speaker of the house on Friday August 23, after former speaker Glen Casada, R-Franklin, resigned amid controversy.

Casada was involved in controversy after reports promulgated his alleged involvement in sending sexually explicit, misogynistic and racist text messages. In May, he received a no confidence vote from his caucus. He left his position as speaker of the house on August 2.

The GOP nominated Sexton shortly after and on August 23 at the House’s 111 General Assembly, he was approved by a vote of 94-0 (Bo Mitchell, D-Nashville and Gloria Johnson, D-Knoxville, abstained).

Sexton, who grew up in Knoxville and Oak Ridge, has served as the representative from Tennessee’s 25 state district since 2010. He began his political career in 1994, when, as a recent graduate from the University of Tennessee-Knoxville, he worked for Randy McNally’s state senate campaign.

Afterwards, Sexton worked in various marketing and banking jobs until 2008, when he ran for the mayoral seat of Crossville, Tenn. He lost by a margin of 60 votes. But, in 2010 Sexton challenged the incumbent Republican of the Crossville district’s house seat and won.

He has since served stints as House Republican whip and House health committee chair. Sexton was most recently voted GOP Caucus Chair in 2018.

Sexton describes himself as a “common-sense conservative,”  which to him means “to have consistency and stability and to [always] be fair.”

Many see Sexton’s arrival as the ushering of a new era in the House, as Sexton has also made a few changes to Casada’s committee leader picks. He replaced Rep. Matthew Hill, R-Jonesborough, with Rep. Curtis Johnson, R-Crossville, as deputy speaker. Rep. Andy Holt, R-Dresden, was replaced by Gary Hicks, R-Rogersville, as chair of the finance subcommittee.

Johnson will also be replacing Hill as chair of the ethics and TennCare committees.

Upon being sworn in, Sexton made it clear he seeks to work bipartisanly and said, “Today we are here to answer our call–a call to work together for the betterment of Tennessee.”

Sexton is an advocate of the Second Amendment (he is a member of the National Rifle Association) and supporter of the pro-life movement. He was heavily involved in the pushback against a Tennessee state income tax and is a proponent of the Tennessee Agriculture Enhancement Program, a program that gives low-interest loans to farmers.

His economic strategies include making Tennessee a target for businesses. He also has a history of working to improve Tennessee’s educational system. Now 48, he is a married father of three, and is of the Central Baptist Association faith.