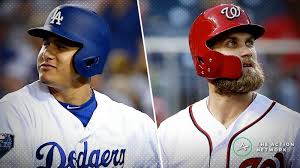 Infielder Manny Machado and outfielder Bryce Harper have yet to agree to a deal. Both of these players are All-Stars with great offensive talents and defensive abilities. Machado and Harper both have had 20+ home runs in the last few seasons, with batting averages over .250. Who will offer them the max contract they think they deserve?

Drafted first overall by the Washington Nationals in 2010, Harper has finally reached free agency. Teams knew he would be a free agent after the 2018 season, and to put money aside if they wanted to sign him. Although all 30 teams wish they could land a player with Harper’s caliber, only a handful of teams have seriously been in contention to sign him: The LA Dodgers, Philadelphia Phillies, New York Yankees and Washington Nationals were said to have been big contenders.

With both of these high-caliber players asking for multi-year deals, teams need to have plenty of cap space to sign them. All five teams seem to have been in the running for the outfielder, but the Dodgers and Yankees don’t have much cap space in order to sign Harper to a multi-year, $300 million deal that he covets. The Phillies and Nationals  the teams that could give Harper what he wants. There have been some mystery teams, including the San Diego Padres, who has plenty of cap space to sign Harper.

After the Dodgers signed outfielder AJ Pollack, they will not sign Harper. The Phillies and Nationals seem to be the most serious contenders for the four-time All-Star. Reports have come out in the last few hours that Harper is leaning towards signing with the Philadelphia Phillies, bringing a once in a lifetime talent to the City of Brotherly Love.

Conversely, the sweepstakes for Manny Machado has been quiet, as a lot of teams question Machado’s work ethic with his “johnny hustle” quote in the 2018 playoffs: “I’m not the type of player that’s going to be ‘Johnny Hustle,’ and run down the line and slide to first base and … you know, whatever can happen. That’s just not my personality, that’s not my cup of tea, that’s not who I am.” This sparked a controversy among teams looking to sign Machado, but with such a generational talent, teams will probably overlook the statement, even though they will take it into consideration.

Machado has talked to the Philadelphia Phillies, Chicago White Sox and the New York Yankees, and also drawn interest from the San Diego Padres and Atlanta Braves. After signing former Gold Glove award winner Troy Tulowitzki and DJ Lemahieu, the Yankees do not look like they will be signing Machado. The team garnering the most interest by the All-Star is the Chicago White Sox, after signing close friends of Machado to possibly sway him to Windy City. Machado’s brother-in-law, Yonder Alonso, had been traded to Chicago from the Cleveland Indians in December, to try to sway Machado to Chicago.

A few players around the league are wondering how such great talents are not signed, but it all leads to one thing: money. Money is a huge influence in the world of professional sports, especially when you think you know what you deserve. These two talented players will most likely end up with max contracts, but only time will tell who the daring and lucky teams are to pull it off.