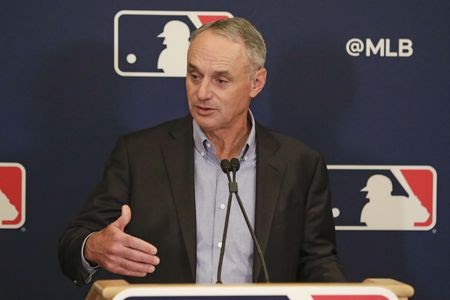 Major League Baseball not calling it quits; “Clubs remain committed to playing as many games as possible”

With all large gatherings being strictly forbidden in the effort to reduce the spread of Covid-19, all major sports have been forced to delay, or even cancel entire seasons in the wake of the virus.

With Major League Baseball’s season being delayed shortly into spring training, questions remain on if a full-length season is still possible, as well as how baseball will be played while still having player and fan safety at the forefront of concern.

Major League Baseball issued a statement Tuesday morning to address these concerns, as well as potential options moving forward in regards to Covid-19.

“MLB has been actively considering numerous contingency plans that would allow play to commence once the public health situation has improved to the point that it is safe to do so,” read the statement issued through the MLB.com website. “The health and safety of our employees, players fans and the public at large are paramount, and we are not ready at this time to endorse any particular format for staging games.”

Major League Baseball commissioner Rob Manfred remains optimistic that play will resume for Major League clubs, but also assures that the health and safety of players and fans is of the utmost importance.

“The clubs remain committed to playing as many games as possible,” said Manfred. “But one thing I know for sure is baseball will be back.”

Amid the scramble to get baseball games underway, while also keeping safety at the forefront of attention, Major League Baseball and the player’s union have considered a scenario involving games being played in front of no fans.

The two entities are currently discussing the possibility of all 30 teams residing in Phoenix, with players living in isolation, but games ultimately being played and televised without fans in attendance.

Phoenix holds the potential to house all players, as well as having ample playing space due to half of baseball’s teams conducting spring training and exhibition games there prior to the commencement of each regular season.

According to Gus Saltonstall with Yahoo Sports, “Reportedly, federal officials at the Centers for Disease Control and Prevention as well as the National Institutes of Health have shown support for a plan that would adhere to strict isolation, promote social distancing and allow the MLB to become the first professional sport to return in North America.”

With baseball officials and players working towards a decision, it appears that baseball could be the first of North America’s four major sports to return.

Unless baseball were to place a tremendous workload on its players in the form of regularly scheduled doubleheaders, or games being played well into December, and even January, it has become inevitable that the 2020 baseball season will be shortened.

This will not be the first time players and fans have experienced a shortened season, but it will be the first since 1981 that the regularly scheduled number of regular season games will not take place.

A strike, or “lockout” by Major League players first took place in 1972, causing a cancellation of 86 games, as well as another strike in 1981 resulting in a cancellation of 713 games. Baseball’s most recent cancellations came as a result of another “lockout” late in the 1994-95 season in which all postseason play was canceled.