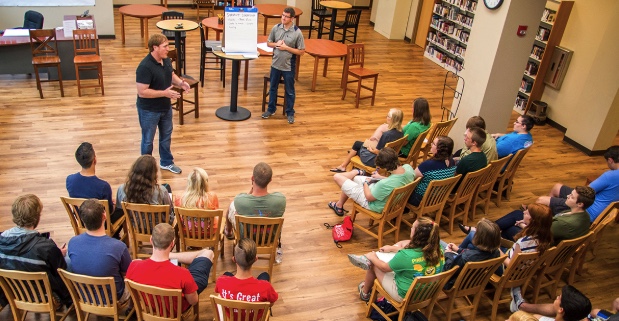 DAYTON, TN—The ratification of a new Student Government Association (SGA) constitution has cut its number of offices in half and turned control of student events over to the Office of Student Life (OSL). SGA held scheduled elections on August 28, but its two highest positions were not open for election.

Returning SGA President Andrew Appel said he hopes the changes will narrow the focus of the organization, which he felt was unclear.

“What we’re trying to do now is specifically lay out, even within our own organization, what does the Senate do? What does SGA do?” President Appel said. “And we now have a system of ordinances and a system of resolutions to do that.”

The new constitution, ratified in April, has organized SGA’s three branches into 11 offices in one organization. SGA elected Appel and his Vice President, Bryan Knowles through a special vote at the end of last semester, in order to ensure a smooth transition through the constitution’s first year. Walker Frizzell was also appointed by Appel as administrative assistant.

Vice President Knowles said that the decision to downsize was made to fight general apathy among SGA’s members and create a more competitive environment.

“I think some of our positions last year weren’t even filled, and so we didn’t see any desire for anyone to participate,” Knowles said. “Nobody seemed to particularly care that this was going on, so we thought that this was much better than the concept of how SGA existed last semester.”

The constitution itself mandates elections every April, but Knowles said elections needed to be held now to fill the eight open offices.

“It’s the first year, and it’s just a necessary irregularity that needs to take place before it (SGA) can function as it’s supposed to,” Knowles said.

Two Student Senator positions for every social class were elected on August 28, but the mandated election for rising classes will still be held in April to even out the irregularity. The constitution allows for the incoming freshman senators to be elected every fall in order to ensure they are represented.

Dean of Students Bruce Morgan said he also hopes moving the control of events to Student Life will create a more efficient version of SGA.

The student body elected Hailee Robinson and Moses Cope as freshman senators on August 28. The incumbent Dillon Melvin returned to SGA as the sophomore male Senator with Mikayla Marshall as the sophomore female senator, while Morgan Saunders and Joshua Robe took the junior senator positions. Devin Burrow and Aleithia Robe were elected to the senior senator positions.

Mathäus Schwarzen is a staff writer for the Bryan Triangle, and a Sophomore at Bryan College. He spends his free time writing and listening to music. When he graduates, he is considering working for a travel magazine.