Nashville, Tenn–On Monday, January 28, it was a bright and early morning, (just kidding it was dark,) as the Bryan Triangle team met to leave for Nashville and explore both the  Southern Baptist Convention Center Baptist Press headquarters and the Frist Art Museum. The team had the opportunity to experience a behind the scenes tour of the Baptist Press and converse with journalists and writers. The excursion helped the team to better understand the work that goes into writing for a media group. Upon arrival, the team stopped at a small, hole in the wall IHOP for breakfast.

When their stomachs were full, they gathered together for the next stop: the Southern Baptist Convention Center- home of the Baptist Press. After getting through the construction and traffic, the team entered the press headquarters. Shawn Hendricks welcomed and showed the students around the building. The Baptist Press writers introduced themselves as the students stopped by their offices. The team met writers Diana Chandler, Shawn Hendricks, David Roach, Art Toalston, and Laura Hurd.

Writer David Roach talked about the diversity of writing preparation styles among journalists. Roach’s writing style consists of a pen and paper; he prefers to go the old fashion way and write down his notes and maps out a plan before he starts writing. He gathers his research and builds a foundation before he continues on the keyboard.

The Triangle team gathered in the Baptist Press meeting room to speak with the Editor-in-Chief Shawn Hendricks. After showing a presentation and explaining the process of publication, Hendricks took the team to the library on the second floor. The library held the archives from all of the publications of the Baptist Press organization. The oldest item in the library is a bottle of water which is believed to be snow from Antarctica during the year Jesus was born. The team then proceeded on to the Baptist Press’ Wall of Fame. There were several influential journalists and photographers posted in the museum. Billy Graham was marked on the Wall of Fame with a plaque. Several articles and pictures were exhibited for the visitors to see.

After exploring Baptist Press, the team walked to the Frist Art Museum. Walking through the exhibits, the students took in the information and art from Renaissance Italy. Life, love and marriage chests were on display. The students learned about the arranged marriages that happened during this time which led to the marriage chests. After visiting all the exhibits, the students got to partake in an interactive exhibit where they were able to draw, paint, make stop motion scenes, and make shadow art.

After a long day, the students recharged at a Chinese Buffet. With the underlying rule set by Dr. Ecarma, the team had to eat four plates before they could eat dessert. Needless to say, no person left hungry. 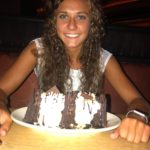 Rylee Evans is a freshman communications: digital media major at Bryan College. She is from Pikeville, Tn and graduated from Bledsoe County High School. Rylee is on the women’s soccer team, and she enjoys spending time with her friends and family, hunting, and boxing.