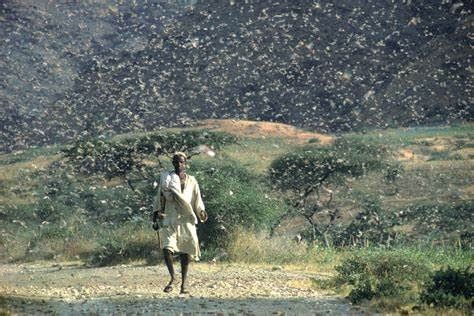 In a time where the public is captivated by news of the COVID-19 outbreak, another plague is terrorising millions in Africa, and is garnering little attention. Locusts numbering into the hundreds of billions are tearing across East Africa and threatening food supplies, while rapidly multiplying.

In January, the UN Food and Agriculture Administration warned of the potential size that these pests could reach. According to Matt Jones on the Mother Jones news site, the organization  warned that by June the swarms could multiply by 500 in size.

Currently, a second wave of locusts 20 times larger than the first thanks to recent heavy rainfall, are cutting through Yemen and along the Persian Gulf. According to Jones, “New swarms are particularly severe in Kenya, Ethiopia, and Somalia.”

Not only is this timing unfortunate due to complications relating to COVID-19, but also could not come at a worse time for farmers and the life cycles of the plants.

“The timing is really horrendous, because the farmers are just planting, and the seedlings are just coming up now since it’s the beginning of the rainy season,” says Keith Cressman, senior locust forecasting officer with the FAO. “And it’s right at the same time when you have an increasing number of swarms in Kenya and in Ethiopia. There’s already pictures and reports of the seedlings getting hammered by the swarms. So basically that’s it for the farmers’ crops.”

“Our only option is to try to kill them all,” said Bayeh Mulatu, a pest control expert at the United Nations’ Food and Agriculture Organization (FAO) in Addis Ababa, Ethiopia’s capital. Nations have begun efforts to combat the bug populations in the form of crop dusting.

Underdeveloped countries such as Ethiopia and Somalia face difficulties ahead in trying to contain and extinguish the swarms. According to Max Bearak with the Washington Post, “the prospects of control remain slim. Hundreds of swarms have hatched in the sandy soil of Yemen and Somalia’s coastal plains, where little to nothing is being done to control them. Ethi­o­pia has only three operational planes to spray insecticides, and Kenya has five.”

Locusts are cold-blooded, so they spend little time off the ground before the day heats up. The most effective crop-spraying time is early in the morning before the insects have taken flight. If it becomes late enough in the day for the insects to take flight, dusting efforts can become not only ineffective, but dangerous as well.

“They ride up on thermals [or updrafts] as high as 3,000 feet,” said Andrew Van Zyl, a South African who flies a spraying plane. “The swarms are thick enough that they block the plane’s air intake. The conditions are actually quite dangerous.”

African governments, as well as the FAO, are scrambling to gather funds for improving equipment and resources for crop dusting, but action is needed immediately in order to prevent further reproduction and spread from country to country.

“What we are trying to do with them is to be ready as soon as the swarms arrive,” says ecologist Cyril Piou, of the French Agricultural Research Center for International Development, “to have a quick answer and not let them reproduce again and exponentially grow again.”