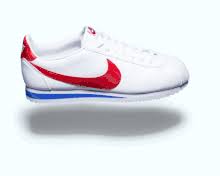 The Shoe that started NIKE

Few sneakers can stand the test of time and rise above others. It must go from a quick trend to an instant classic. It must  be adopted by sneakerheads and the general public to be successful. A prime example of this is the Nike Cortez, one of the most infamous pairs of sneakers, and the shoe that jump started the Nike brand.

With this split came the Cortez. A new design was made by Nike’s co-founder Bill Bowerman. Bowerman at the time was an Olympic-level track coach. He believed athletes needed a durable and comfortable shoe designed for training and running. The Nike Cortez was released at the peak of the 1972 Olympics, contributing to the popularity of the shoe.

While the Cortez was accepted and used by athletes, it was more importantly embraced by casual runners, or members of the jogging movement, a movement Bowerman helped create. The Cortez was the best selling shoe of its time, and because of the sneakers’ massive success, Nike was on the front of sporting goods for the first time. That gave Nike a great opportunity to establish themselves as a genuine brand. Several years later, Nike released the women’s version of the shoe, the Senorita Cortez. In an episode of the TV show Charlie’s Angels, Farrah Fawcett wore the Cortez. This too brought Nike tons of success, and sales skyrocketed. In 1976 Nike had their first professional athlete endorsement with Steve Prefontaine who was a professional runner. Even singer and songwriter Elton John wore a pair of the Cortez’, and this continued to bring them more exposure.

While the Cortez isn’t as relevant now, it gave Nike the popularity they needed to be one of today’s leading influencers in culture.