The Chattanooga Times Free Press is celebrating 150 years of “giving the news impartially, without fear or favor” this year, the motto of founder Adolph Ochs.

Mark Kennedy, a columnist for the last 39 years at the Times Free Press, told a group of Bryan College digital media and journalism students about the history of the newspaper. 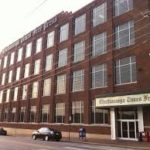 The firm Kirby & Gamble published the first daily paper known then as The Daily Times on December 15, 1869. The Daily Times was sold for 25 cents a week, $10 for the whole year. The headline of that first paper reads: “A Controversy in the Catholic Church About Music.” The first page was made up of six columns, the right two of which were ads except for the daily editorial by the publisher.

For the next 50 years, the look of the paper remained the same, except it was seven columns instead of six. However, the content changed, as the front page no longer had ads nor local news, and the price changed, as each paper now cost 2 cents. But The Daily Times was struggling financially. In 1878, a 20-year old named Adolph Ochs bought the struggling daily paper for $5,000 in an attempt to save it. He served as the newspaper’s publisher until his death in 1935.

In 1891, another daily newspaper called the Chattanooga-News Free Press began publishing in Chattanooga. This paper stayed separate from the Daily Times until 1999, when the two daily papers merged to form the Chattanooga Times Free Press.

Kennedy took the students on a tour of the newsroom, showing them where the journalists sit, the newspaper printer and the truck loading station. “Be careful not to lean against the walls and railings,” he told the students as they walked through the room with the huge newspaper printer in it. “The ink covers every surface in this room.”

The daily newspapers print from 11 p.m. until 2 a.m. every single night. The printer can crank out 40 to 50 thousand 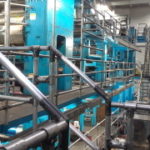 papers in this time period. The papers are then folded together and loaded onto trucks for distribution the next day. “There are people working on these newspapers 24 hours a day,” Kennedy said.

For the last decade and a half, the Times Free Press and its predecessors have recorded almost every significant event in Chattanooga’s history. To celebrate this time spent serving the journalism world, the Chattanooga Times Free Press is publishing one article every Sunday from the newspaper’s archives, specifically the Daily Times.

Triangle. She enjoys creative writing, listening to music, and saying things that make