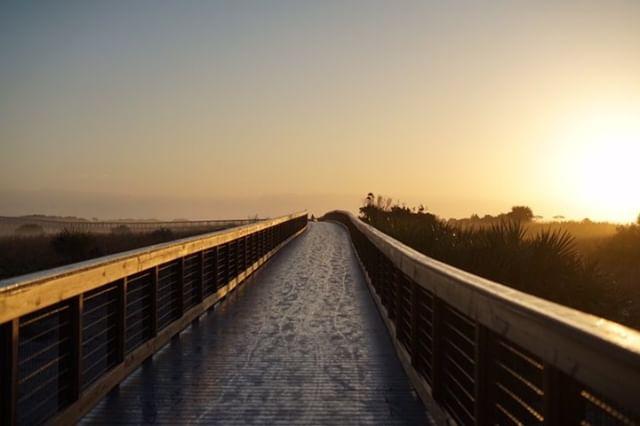 Imagine relearning how to walk, read, write, and brush your teeth at the age of nine. For 18-year-old George Wood, this isn’t hard to imagine.

When Wood was nine, he suffered a brain injury that caused his white blood cells to turn on his own immune system and begin attacking his body. He lost his ability to walk or to even sit up in his bed.

After two weeks of tests, Wood was sent to a Scottish rite in Atlanta, Georgia, where the top brain doctors identified what happened to him. Following the diagnosis, Wood went through months of therapy and operations.

Wood lost all of his abilities to do the simplest things. “I couldn’t sit up. I couldn’t walk. I couldn’t do simple math. I couldn’t even write. That was the hardest part,” Wood said. “Mentally, knowing what all the other kids my age were doing and physically having to learn how to stuff everyone learns from the ages two to seven.”    A bridge on New Smyrna Beach, Florida

Wood explained that it was  his faith in God that helped him get through this trying time in his life.

At the age of 18, Wood already has a strong history behind him and a promising career ahead of him. From ages 15 to 17, he worked for outdoor film company Waypoint TV. Wood took full unreleased episodes of the shows “Into the Blue,” “Saltwater Experience,” and a handful of others and created social media promos for all social media platforms. These shows are now on NBC and the Discovery Channel.

At age 17, Wood left Waypoint TV to start his own photography and videography company, called G&W MultiMedia as well as to work as a lighting designer for Silverdale Church in East Brainerd, TN. Wood also runs a YouTube channel called “exploring with george”, in which he posts vlogs about his travel experiences.

Randi Hazelwood is a digital media major and an assistant editor for the Bryan Triangle. She enjoys creative writing, listening to music, and saying things that make no sense.